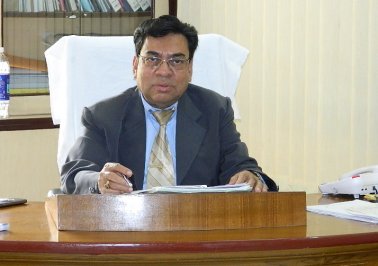 From the Director's Desk
Scientific knowledge is growing at an unprecedented rate in the earlier years of the 21st century. Discovery, scientific applications in technology and its development are having tremendous impact on the social order of nations and the quality of life of people. Growth in high quality scientific and technological research requires sophisticated infrastructure which in turn requires optimal financial input.

Academic performance (University results) of our students have been consistently excellent. In the first batch four students of four different streams were ranked first in the Kalyani University with distinction marks. This record continues till date with students of NSEC holding top positions in M Tech and in 2008 two of our students in B Tech (CSE, Rank Third) and (BME) are the topper of university (MAKAUT).

The placement record of NSEC during the last two years bears a hall mark in the professional landscape. About 70% of the total final year students have been absorbed with the annual package of 2.5 to 3.5 Lakhs.

The students are guided by qualified teaching staff(about 200 including technical and lab Assistants). Faculty Training Programmes have been undertaken by the institution with participation in organisations seminars, conference, group discussion, crash courses etc. Our students are also very active. Some of the senior students have formed technical clubs, such as Phoenix, which lead to enrich technological know-how and also develop personality in professional career through interaction and active participation.

The convincing development of the college has achieved sanction of four M.Tech courses (Control & Instrumentation, Power System, Computer Science & Engineering and Electronics & Communication Enhineering) which started in 2005. I believe that the institution still stands on a developing process and this development and progress is the result of joint effort and endeavour of students, teachers,staffs and management I wish, our students will maintain academic sanctity through discipline, perseverance and diligence of high quality.

Netaji Subhash Engineering College bears the name of our great leader of the country. Our Vision and Mission aim at giving academic leadership to the country. We strongly believe that our students, faculty, staff and management will jointly lift the college to a great height.

A Brief Profile of Our Director
Dr. Hrishikesh Mandal professionally was an Ecologist of Anthropological Survey of India, Govt. of India. He undertook different regional and national projects till his superannuation in 2004. His area of interest in respect of research work was human adaptation under different ecological condtion for which he was awarded Ph.D. Degree by the University of Calcutta. In 1973 he was assigned to a field survey on the study of Habitat Economy and Society of Tribal Societies in the Kamen district of NEFA (North Eastern Frontier Agencies), presently renamed as Arunachal Pradesh under Border Area Survey. During 1974 to 1976. Dr. Mandal was associated with different projects undertaken by National Atlas and Thematric Mapping Organization specially in the Sundarban areas. Since 1977 to 2003 Dr. Mandal had been associated with different national and regional projects assigned by Anthropological Survey of India and approved by the Department of Culture, Govt. of India (MHRD). He visited across the country viz. Maharashtra, Madhya Pradesh, Orissa, Goa, Rajasthan and Andaman Island for his field survey.

Dr. Mandal is honours graduate and obtained Masters Degree in Geography from the University of Calcutta.

Among his publications writings on environmental issues and its management are noteworthy. His reputed publications are Tribal Map of India (2000), Map of Scheduled Caste of India (2000), India: An Illustrated Atlas of Tribal World (2002), An Atlas on scheduled Castes of India (2003), Goa under People of India as an Editor (published in 1993). Sikkim: A Tourist Paradise (January, 2004), Traditional Wisdom and Sustainable Living, A study on the Indian Tribal Societies (edt. 2013).

He has been associated with Netaji Subhash Engineering College, Garia, Kolkata-700152 as Honorary Director since 2004.